He started his career when he came to Ubud in 2003. From then on he became a very creative and also prolific painter. His true commitment to the art of painting was enhanced through the inspiring atmosphere of Ubud that had attracted so many painters in the past, too. When he was still a young child, he liked to play with colors at school. After he had finished secondary school, he was already skilled in the use of colors. During his later school time in Berlin, Germany, he had the chance to visit museums and exhibitions and could study the original works of great masters. Although he was supposed to become an engineer, he hadn't given up the idea of becoming a professional painter.

"I am the one in the family who loved to play with colors. When I was a teenager, paper and colored pencils were my closest friends. Drawing could help me through hard times and fill my spare time. I participated in some school drawing competitions."

"Using different media and changing my style is the process I follow to get better results. Nature and soul expression are the themes I like most and are currently matched to my spirit."

"Nature and soul expression are the themes I like most and are currently matched to my spirit."

There were other influences from well known master painters, too. He likes in particular the works of the Swiss-German painter Paul Klee because of their sensitive and minimalist style in composition and structure. He is also influenced and impressed by Gustav Klimt and Basquiat. Although these artists are indeed very different from each other, they conveyed meaning to him. From Klimt he learned about color. Basquiat, the young and radical New York artist, worked together with Andy Warhol. In Basquiat's life and work He recognizes the radical sense of being an artist totally and truly involved with what he is doing. But they are all stars to him far out in the sky, as his modestly remarks.

He went through different periods of style and technique. Influences of cubism are still visible in his painting, but also a certain affinity to color field painting. With his art he tries to find his soul and to make his emotions visible. Art becomes an internal exploration of different stages of consciousness. Painting is a means of meditation to him, As the mind works, confusion comes and the artist feels lost in time and space. When calmness of the mind is finally attained, the brush strokes will be focused and centered. The artist shapes emotions in colors to bring something elusive into form and structure.

In his work we can discover the same affinity to the tradition of Zen or Chinese Chan Buddhist painting that has deeply influenced modern American expressionism. Chinese painting was guided by a sense of wholeness, depicting the connectedness of all living things. In landscape painting the vision of far horizons prevailed. Rivers symbolized the passage of time and the cycle of decaying and growing. Man was totally involved within this circular structure of universe.

This classical brush stroke technique required a very skillful control. The whole arm moved free, without giving any further support for the brush. The inspiration in the painter's mind was channeled directly through the arm a: g on the paper. The individual painters energy flow - almost like an electric current - was visible in the art work. The slightest pressure (lf the hand varied the character of the brush stroke.

These ideas and techniques were later applied by modern abstract painters like Jackson Pollock and Mark Rothko and were used - among others - in modern painting. The color was nothing more than an 'instrument' for expressing something larger, as Rothko once said. Rothko communicated basic human emotions in color and shapes to achieve quiet, subtle, almost meditative effects.

He actually follows a long and old Asian tradition although he represents modernity by his abstract work. His inner self crystallizes in painting and captures the energy in himself. The texture and colors evoke emotional and sensual qualities. The pulse and pressure of the brush strokes create a rhythm of movement and flow. Experiences of life and time are encapsulated in forms. Concerns and mystery are part of human nature. - Anton Larenz

He work has found admirers in places as far and diverse as Pakistan, London, USA and India. He was invited to exhibit his work with Nelda Gilliam, at the inaugural "Creek Contemporary Art Fair" held from 6th to 10th March, 2007 in Dubai, part of the prestigious Gulf Art Fair, Dubai.
During this fair, his technique was admired and praised by most of his peers and collectors. Buyers and gallery reps from Japan, UK, Kuwait, Pakistan and USA expressed interest in exhibiting His work in their respective galleries. 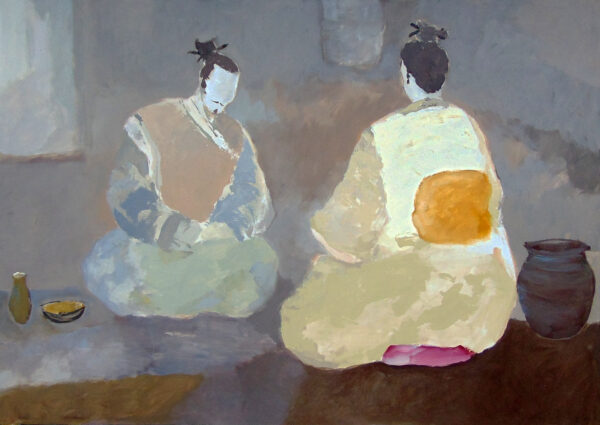